When I was a little kid, I was a really picky eater.  No seafood, no spaghetti sauce, no pizza, no cold sandwiches, definitely no mayo, and the list went on and on. I know, it's crazy, I mean what kind of kid doesn’t like pizza?! It didn't matter where we were; barbeques, potlucks, birthday parties, I was that weird picky kid who had no idea that she was missing out on SO much good food! I used to ask my mom to pack me peanut butter crackers for my school lunch because I hated almost all lunch type foods.  The only thing I did like to eat for lunch was grilled cheese and you can’t very well pack up a grilled cheese, stick in your cold lunch box and eat it four hours later. Anyways, eventually over the years I have grown out of most of my picky eating habits, with the exception of seafood and mushrooms (bleck!) As I got more and more interested in the food world I tried to expand my palate and became willing to try foods that I previously thought were evil to give them another chance.  I discovered that, while I still won’t just spread plain mayo on a sandwich, I found out that if I mix it with some other kinds of flavoring, it’s actually quite tasty!  I stumbled upon a recipe for this bacon cheddar ranch potato salad a few weeks ago and I have made it several times since then because it is so delicious. It tastes just like a loaded, ranch-y baked potato and is very simple to throw together. 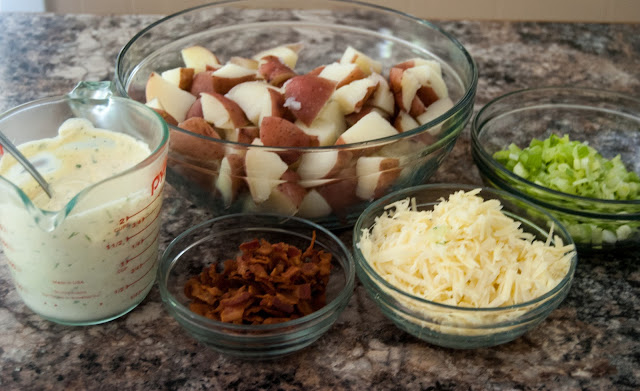 Cut cleaned red potatoes into approximately 1” chunks, place in a large pot of cold salted water, cover and bring to a boil.  Continue to boil for about 10-15 minutes until the potatoes are just fork tender. You want the potatoes to still have a bit of bite to them and not be too cooked and smooshy.   Drain the potatoes, transfer to a bowl and place in the refrigerator until completely cooled.  I really recommend taking the time to let them cool off in the fridge. I have made this salad in a hurry and rinsed the potatoes under cold water until cooled, but it does something that changes the texture of the potatoes. (If you don't have the time, just rinse them until cool, the salad will still be awesome. Make sure to pat the potatoes dry, otherwise the dressing won't adhere well.) While the potatoes are cooling, mix up the dressing and prep the other ingredients.  In a 2 cup measuring cup or small bowl, mix together the mayo, milk, vinegar, mustard, honey, ranch seasoning, salt, pepper and fresh herbs, if using.   Set this aside in the fridge until ready to assemble.  Cook approximately 6 slices of chopped bacon until fairly crisp and drain on paper towels. Just before you are ready to assemble chop the celery and green onion into small pieces and grate the cheddar cheese.   Toss the veggies, the cheese, and about ¾ of the dressing into the cold potatoes and give it a good stir to combine.  If it looks a little dry still, add more of the dressing.  If you have time to let the potato salad chill in the fridge for a couple of hours or even overnight, it will really help the flavors come together.  Save any remaining dressing you have, sometimes the potatoes are thirsty and really soak up the dressing, so you might have to add a little more later. Stir in the bacon bits right before serving. There is nothing worse than soggy bacon! 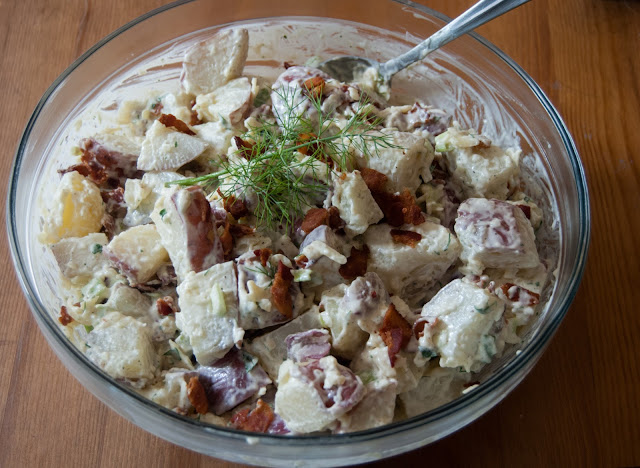 The potato salad would be a great compliment to burgers and hot dogs, pulled pork, barbeque chicken, etc. The dressing is creamy and has a nice ranch flavor but it doesn’t over power the other ingredients. The fresh dill and parsley, if you choose to add them, add a herb-y freshness to the salad while the bacon and cheddar give contrasting textures and a bit of saltiness.  This potato salad will definitely be a hit at your next barbeque! 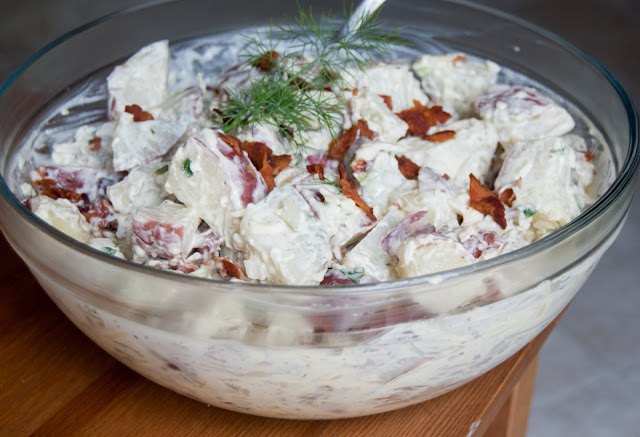 By the way, feel free to change up the ingredients with whatever you like or have on hand; different potatoes, different veggies, different cheese, whatever makes you happy!

Inspired by i heart eating

Cube washed potatoes into 1" chunks, bring to a boil in salted water and boil about 10-15 minutes.  Drain and let the potatoes cool. Cook the chopped bacon until fairly crispy. Shred the cheese and chop the celery and green onions. Mix the remaining ingredients together and stir until well combined.  When the potatoes are cold, mix all of the ingredients in a large bowl, except for the bacon. Reserve about 1/4 of the dressing until everything is well mixed and see if you need more. Let chill for several hours or overnight. Stir in bacon right before serving.