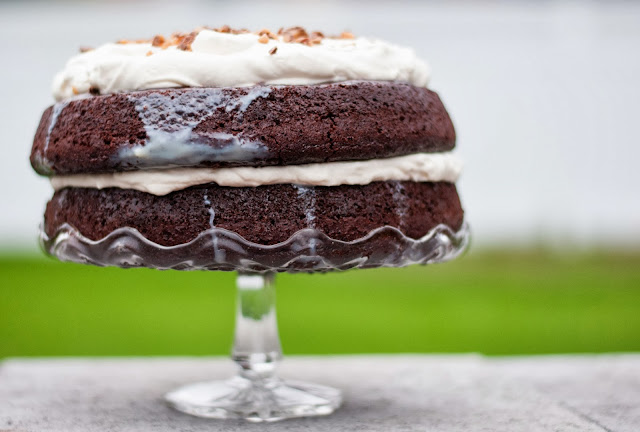 A week or two before my mom's birthday we were gmail chatting and I mentioned that I was really craving cake and she responded by saying..."mmmm that sounds good, chocolate cake with vanilla frosting, yum!"  So while her comment didn't help curb my cake craving in the slightest (thanks mom.....), it did remind me of this cake recipe and I decided this is what I would make for her birthday cake.

If you spend much time browsing around in the food blog world or even on pinterest, you have probably seen a recipe for this cake pop up from time to time. The most common version is a 9x13 one layer "semi-homemade" style recipe with box cake mix, sweetened condensed milk, jarred sundae sauce, cool whip, and crushed heath bars.  Now, not that there is anything wrong with using box mixes or cool whip; they can be really great time savers and are easy to put together, but I really like trying to make recipes completely from scratch when I can. I feel like this gives me better control of the ingredients and preservatives I am putting in my food.  So I took the idea of this "potluck" style cake and made each of the components from scratch and tried to fancy it up a little bit by making it into a layer cake.

I have read many excellent reviews about the infamous better than sex cake, some people even claiming the cake really lives up to it's name.  While I thought this cake was delicious, I don't know if I will go that far :) Everyone at the birthday party agreed that the cake was fabulous; very rich and chocolatey with a good  balance of sweetness in the homemade whipped cream. 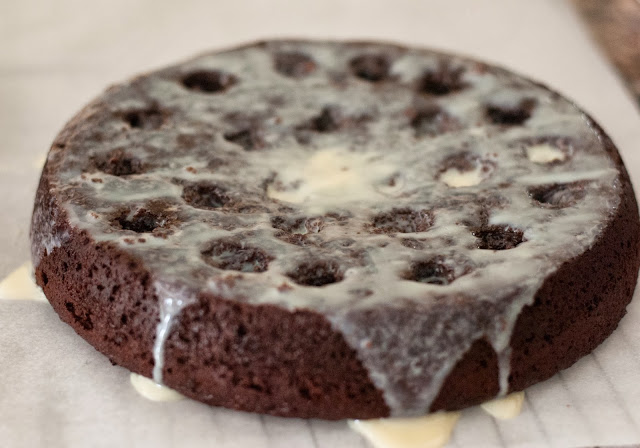 I had two small glitches with my attempt at this recipe, but I have made adjustments to the recipe and assembly to hopefully fix these issues for you.  The biggest problem I had was getting the ooey gooey sweetened condensed milk soaked cakes assembled into the layers.  I laid both layers of cake out on parchment paper  and poked with lots of holes to allow maximum cake soaking.  However this meant making two moves from paper to cake stand, which was a bit tricky since they were so saturated.  Next time I would place one of the cakes directly on the plate or cake stand before soaking so that it is ready to go at assembly time. I would also recommend baking this cake in straight edged cake pans, if you have them, instead of the slightly tapered side style pans that I used.  I think this will give the cake a bit more stability and it will result in a nicer finished look. 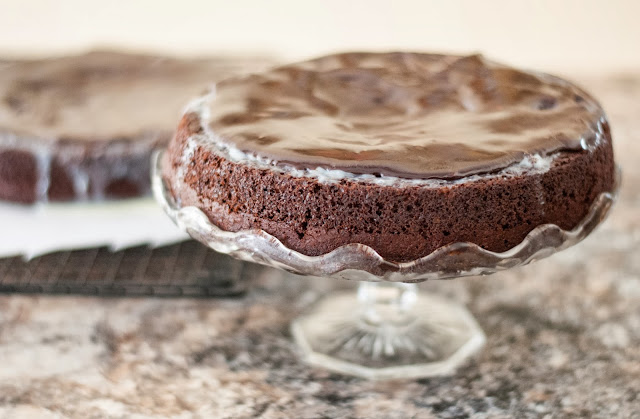 The other problem that I had was the recipe that I used for the chocolate sauce recommended boiling for 8-9 minutes, which I believe ended up bringing the sauce's temperature too high for me. My sauce resulted in more of a thick fudge layer that was very difficult to cut through, hence why there are no pictures of the cake sliced.  To put it 'lightly', it was a huge, giant mess and I ended up carving the cake with a spoon.  I have decreased the cooking time and hopefully you won't have the same problem. 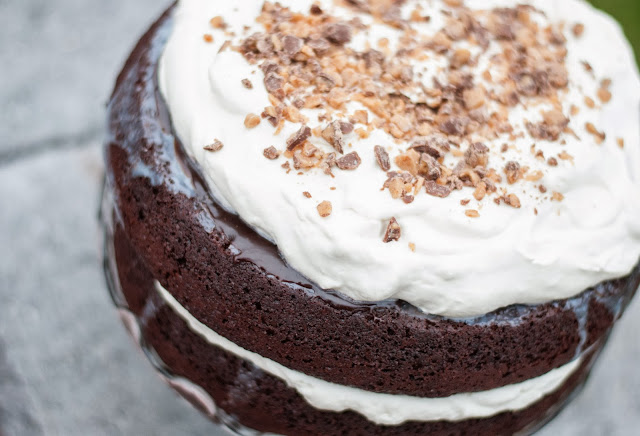 Even with my minor difficulties, I still think this layer cake came out beautiful (well before I attempted to cut it anyways) and it tasted excellent too.  The sweetened condensed milk absorbs into the cake creating a dense gooey texture and the chocolate sauce enhances the richness.  The whipped cream cuts through the chocolatey-ness and brings a wonderful creaminess while the toffee flavored heath bar bits add just the right amount of crunch.  Give this recipe a try and let me know if you think it holds up to it's name! 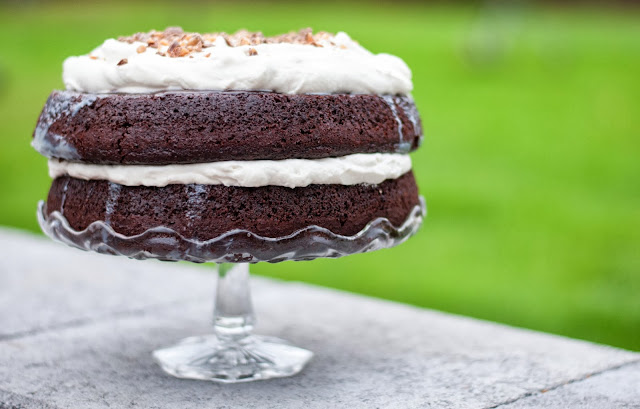 Preheat the oven to 350°F.  Grease two 9" cake pans and line the bottoms with parchment paper rounds.  Grease the parchment paper and dust pans with cocoa powder for optimal cake sticking prevention.  In a large bowl sift (yes, you should actually sift this time because cocoa powder can be so lumpy) the flour, sugar, cocoa powder, baking powder, baking soda, and salt together.  In a large liquid measuring cup, measure the milk and oil together and then whisk in the eggs and vanilla extract.  Pour the liquid mixture into the dry ingredients and whisk until combined.  Lastly, add the boiling water and stir to combine.  The batter will be very liquid.  Divide evenly between the two cake pans and bake for 30-35 minutes until a toothpick inserted into the center comes out clean. Cool in the pans for 10 minutes and then turn out on wire racks lined with parchment paper.

When the cakes are still only slightly warm transfer one cake round to your cake stand or serving plate.  Leave the remaining cake on the parchment paper.  Using the back of a wooden spoon poke holes evenly around the cake, making sure not to poke all the way through.  Pour about 1/2 of the can of sweetened condensed milk over each cake round and allow to soak for at least 20 minutes.

In a microwave safe bowl melt the butter and chocolate together, stopping to stir about every 30 seconds. In a medium size saucepan bring the water to a boil.  Stir in the melted butter and chocolate mixture, sugar, and corn syrup.  Bring the sauce to a bubble, lower the heat, and let cook for about 6 minutes, stirring continuously.  The sauce should be a somewhat thick consistency.  Let the sauce cool for about 10 minutes and pour evenly over the two cakes.  Let the cakes set until cooled.

Beat the cream with an electric mixer or whisk until stiff peaks form and then beat in the sugar and vanilla until well incorporated.