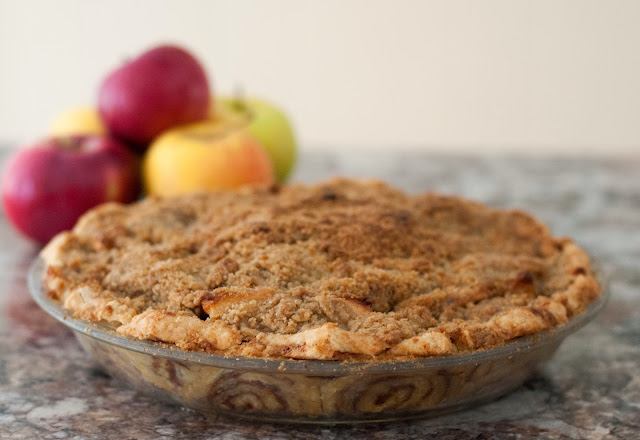 I made this cinnamon roll apple pie along with a chocolate cream pie to bring for Thanksgiving this year.  Both pies were a huge hit but this one was definitely more impressive because of the awesome cinnamon swirl crust. 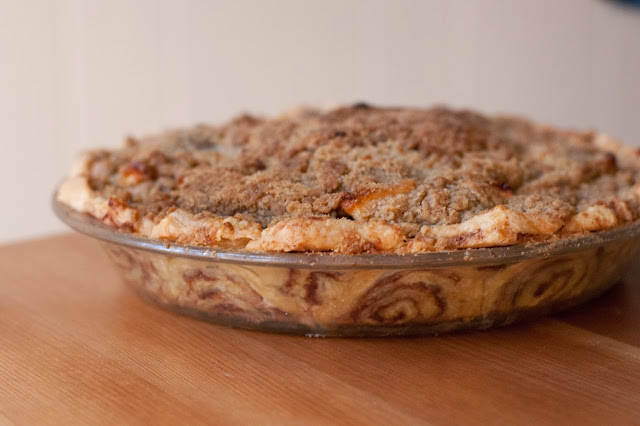 Even though the crust looks really amazing and complicated, it actually only took a few more minutes to put together and came out tasting great.  When I was a kid baking pies with my family we would make "rolly pollies" with the little leftover bits of pie dough that you cut off the edge of the crust.  We would roll the dough out, cover with butter, cinnamon, and sugar and bake them for a sweet treat.  They were definitely the highlight of pie making back then. 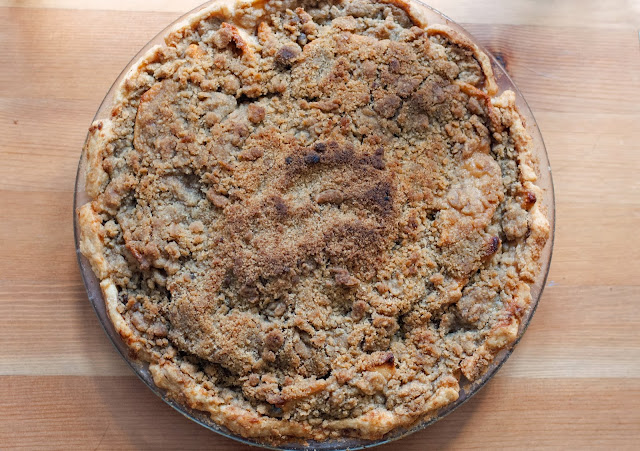 When I saw this pie crust technique I was immediately reminded of those delicious pie crust morsels and knew I had to use it for my dutch apple pie.  This isn't exactly the same thing as rolly pollies because there is no sugar mixed in the with butter and cinnamon.  The sugar would melt and caramelize in the crust and to the pie plate making it impossible to get the pie out of the dish, which would not be impressive at all. 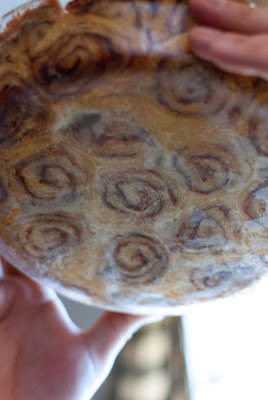 This crust recipe is not only pretty but also turned out to be flaky and tender with an extra kick of the cinnamon flavor.  Make sure that you use a glass pie plate so that you can show this beauty off to everyone.

The rest of the pie came out excellent too.  I have always preferred dutch apple pie to traditional two crust apple pie.  The crumble topping adds wonderful crunchy texture and extra sweetness making this dessert into a apple crisp/pie combination.  You get all the benefits of apple crisp and the satisfaction of a nice big slice of pie.  There is something very comforting about eating a slice pie especially around the holidays.

I made all of my relatives wait to dig into dessert while I had K hold up the pie plate for me so that I could snap a picture of the bottom crust.  Oops, hopefully nobody minded waiting!  I meant to take step by step pictures while I was assembling but I got too distracted making a bunch of other recipes too.  You can see how each of the swirls are laid out and pressed together to form the crust. 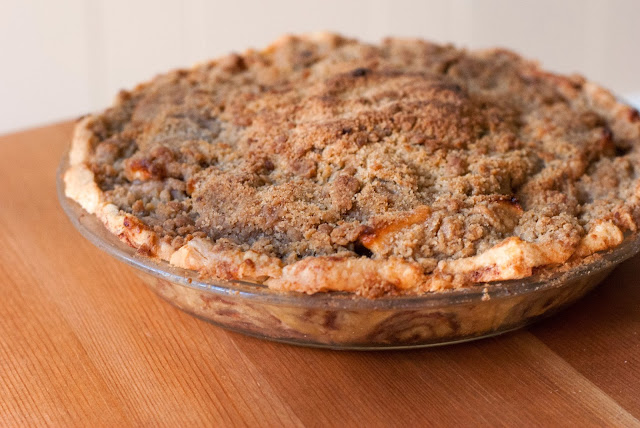 The apples were perfectly tender but still had some texture left to them.  I really like a variety of apples in my pies for different sweetness levels and firmness.  Apples like Macintosh are very sweet but get smooshy easily, while Granny Smiths are much more firm but can taste very tart.  The combo of two or three apples with these characteristics works beautifully in any apple dish.   The pie is perfect topped with whipped cream or my favorite, slightly warmed with a scoop of vanilla ice cream: apple pie á la mode!  Give this pie a go next time you are looking to impress your family or friends. 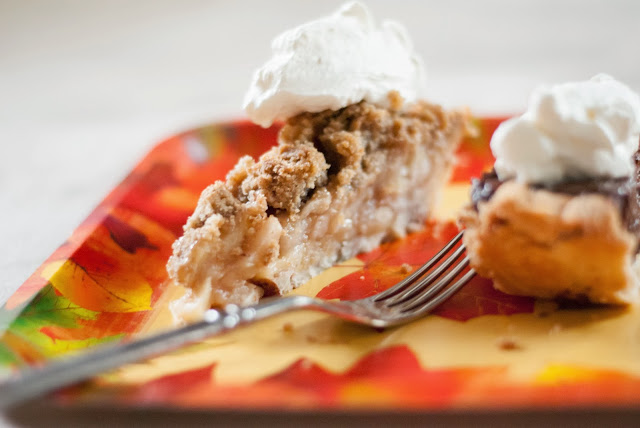 Place the flour and salt in a medium bowl and stir briefly to combine.  Cube the shortening and cold butter into small pieces and add to the flour.  Using a pastry cutter or two knives cut the fats into the flour mixture until the most of the fat is in the size of small peas.  Slowly add the cold water about 1 tbsp at a time until the dough just barely holds together when you press it in your hand.  Turn the dough out onto a piece of plastic wrap and use your hands to mold into a disk.  Wrap the dough up in the plastic wrap and refrigerate for at least 30 minutes.  If you leave it in the fridge longer than that, let the dough rest at room temperature about 10 minutes before trying to roll it out.

Squeeze the lemon or orange juice into a large bowl and toss the apples in the juice as you prep them.  This will help keep the apples from turning brown.  Once all of the apples are peeled, cored, and sliced add the remaining ingredients and toss well to combine.  Set this aside until you are ready to assemble the pie.  This mixture will be fine in the refrigerator for a few hours if you want to prepare it in advanced.  You can use whatever variety of apples that you like.  I used mostly Macintosh and Golden Delicious with one Granny Smith since that is what I had on hand.

Put the flour, sugar, and cinnamon into a bowl and mix together.  Cut the butter into cubes and cut into the dry ingredients with a pastry cutter or two knives.  The butter should be the size of small peas when completely combined.  This can also be prepared a few hours ahead of time and kept in the refrigerator.

Preheat your oven to 375°F.  Roll out the pie crust out into a circle about 1/8 inch thick on a smooth well floured surface.  Spread the softened butter evenly over the pie crust and top with the cinnamon. Starting with the edge furthest away from you, roll the pie crust towards you into a spiral like you would for cinnamon rolls.  Trim off the ends and cut into 1/4 inch slices.  Place each spiral round into the bottom of the pie plate and press lightly to flatten the circle.  Continue this process until the entire bottom and sides of your pie plate are covered in cinnamon swirls.  Make sure there are no gaps between any of the spirals and the crust is relatively even in thickness.  Beat the egg with the water until well combined and brush over the entire surface of the pie crust.  Pour the apple mixture onto the crust and arrange the apples evenly.  The apples should be piled somewhat high in the middle.  Top the entire pie with the crumble topping and place the pie plate on a aluminum  foil lined baking tray.  Place this into the oven for about 50-55 minutes.  After about 35 minutes check the pie frequently to make sure the crust and crumble topping are not browning too much. You can tent the pie with foil to prevent excess browning.  Remove the pie from the oven, place on a wire rack and allow the pie to cool to room temperature before serving.